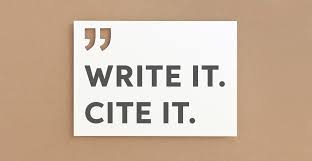 Referencing is an important part of academic work. In a layman language, referencing is how you acknowledge your sources of information that you have used in your writing. It is popularly said that “give unto Caesar what belongs to Caesar”, this popular saying is a biblical verse that perfectly describes what referencing stands for in academics. It is imperative that writers give credit to the sources they relied upon when preparing their manuscripts. As students, referencing add colour to your work and sends a signal to your readers that you are aware of the field in which you are operating. Researchers will always need to refer to the works of other people to corroborate their findings. Referencing also enables better verification of your work. It is so much important that it can make or mar your work.
The prestigious University of Ibadan has guidelines for writing thesis and dissertations, it is mentioned in it that: “No statistical details, no chemical or mechanical equations, no philosophical musings, no groundbreaking discoveries, and no qualitative narratives will save a thesis without proper referencing”. This goes on to tell you how important referencing is in academics. It is also to be noted that even if you are citing from your work (previously published work), you need to ascribe facts and figures to yourself by referring to those previously published works. You should refer to your published works rather than copying the content. Self-plagiarism is still a form of plagiarism. A typical example of an author citing himself is the inaugural lecture of Professor Musa Toyin Yakubu of the Department of Biochemistry, University of Ilorin (see image below)

You should cite your sources after directly quoting an author or directly lifting a statement, and in other similar situations. If one falls short in this regard, one may be guilty of plagiarism even if you didn’t intend to plagiarize.

STYLES OF REFERENCING
The styles of referencing that we have today can be broadly classified into two: the Traditional (numbering or footnote) and the Author-Date/Modern (APA and MLA) styles.
The traditional style is still in use till today but it is called traditional because greater works in the medieval period generally use this style. This kind of referencing employs the use of terms like Ibid: (Ibidem), Op.cit (Opere citato), loc. cit (loco citato) etc.
The modern referencing style started in the 1920s to help authors prepare their works. It is widely accepted by many researchers because of its simplicity. The APA style (American Psychological Association) is widely used in social sciences, it is simple to use and has found its application in hundreds of journals, magazines, and textbooks. The MLA (Modern Language Association) found its application in humanities and related disciplines. This article will only focus on APA style because it is the most widely used in the world today.

EXAMPLES OF IN-TEXT CITATIONS
A. CITING WITHIN THE BODY OF THE WORK
I. In his contribution on the importance of medicinal plants, Musa (2010) remarked that Fadogia agrestis is used in managing male sexual dysfunction.
II. However, from the assessment of the prices along the cocoa marketing chain, local cocoa producers received the least profit (Fold, 2002).

B. CITING THE WORK OF MORE TWO AUTHORS
I. Women play an important role in the trading of bushmeat and its products in rural communities (Ade and Bayo, 2014).
II. Liedholm and Mead (1993) noted that forest product activities have repeatedly been found to provide one of the main sources of non-farm income to rural households.

C. CITING WORK OF MORE THAN TWO AUTHORS
As indicated by Ndoye et al., (1998), these NTFPs supplement household food, income generation, medicinal benefits, provide employment for a large number of people from the farm level to the market place and also serves as a safety net in term of crop failure or low farm output.
Only the surname of the first author would be mentioned, ‘et.al’ is an abbreviation for the Latin word ‘et alia’ which means ‘and others’

E. ASCRIBING A STATEMENT TO MORE THAN ONE AUTHOR
I. In Nigeria, much work has been done in this regard for plantation and exotic tree species like Tectona grandis (e.g., Adesoye and Oluwadare, 2008; Adeyemi and Adesoye, 2010; Popoola and Adesoye, 2012; Shamaki et al., 2016).

G. CITING INTERNET SOURCES
I. An encompassing definition of marriage can be found on http://www.foryourmarriage.com, 2019….

II. Climate change mitigation and adaptation … in our society (www.climateworkforme.org, 2018).

B. NO AUTHOR, NO DATE
What is psychology? (n.d). BestPsychologyDegrees.com. https://www.bestpsychologydegrees.com/what-ispsychology/