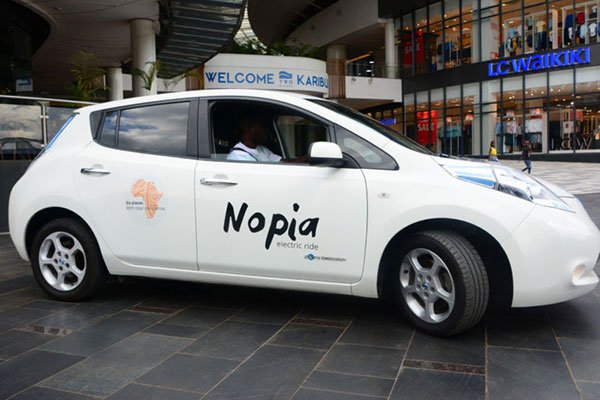 A new electric taxi hailing company in Nairobi is promising to revolutionise the sector, by giving its drivers higher profits than their peers from other companies, while reducing pollution from car emissions.

Finnish company EkoRent Nopia Ride is combining shared transport and electric mobility, as it seeks to make Nairobi the first city in the region to cut back on energy use and emissions using the taxi service.

During the trial phase, EkoRent is maintaining and servicing its two charging stations located at the Two Rivers Mall and the Hub in Karen, at zero cost to the taxi drivers.

The cars have no engine, so they purr along the roads, with electric indicators showing the battery levels, so that drivers can tell when it is time to head to a charging station.

The taxi-hailing company will use the same model on book-a-ride-and-pay formula like the ones Uber and Taxify use.

Users have to download the Nopia Ride mobile app to locate and book the electric taxi vehicles.

Nopia Ride is launching its vehicles at a time when increases in fuel prices have made the taxi business less profitable, forcing drivers to devise ways, sometimes illegal, to protect their margins.

“In this business, the biggest cost is fuel and the recent increase as a result of the eight per cent rise in VAT hit us hard. This is mostly because the taxi-hailing apps failed to factor in this cost, so drivers have to shoulder the burden.

“I saw the opportunity to shift to this electric car model and it has worked well for me. I save $35 daily that I would otherwise have spent on buying fuel,” said Mr Ngari.